Mao Asada's exit from the sport is definitely the end of an era.

I remember seeing Mao for the first time.  It was in 2005 during her debut season on the senior Grand Prix at Trophee Eric Bompard.  I hadn't been following skating much that season.  This was back during my if-Michelle-Kwan-isn't-competing-skating-doesn't-exist phase.  For whatever reason I decided to tune in to the competition and there she was...this tiny girl in an orange dress with a bouncy ponytail, just as cute as she could be.

Then she began to skate and I was in awe.  She moved so effortlessly and easily across the ice that she seemed to float rather than skate.  I had never seen anyone move like that on the ice before (and 12 years later, I still haven't).  She reeled off ridiculously difficult jumps and combos as if they were doubles and barely seemed to be out of breath at the end.  Even with her juniorish "Carmen" routine, I could see there was innate gracefulness to her movements.  I remember watching her and thinking to myself, "She could be a really beautiful skater once she matures."

That was my introduction to Mao Asada. 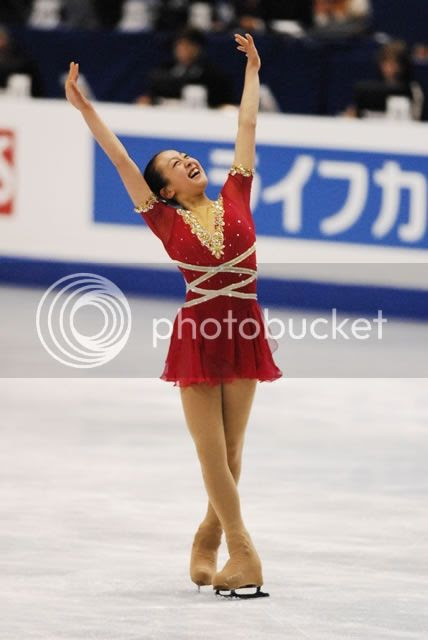 I paid attention to skating sporadically the season prior to and the season after the 2006 Torino Olympics.  I knew that Mao was the top skater of the season on the Grand Prix before the Olympics and that she was too young to participate.  I glanced at the 2007 World Championships and saw her deliver an amazing performance in the FS but finish 2nd to Miki Ando overall.  I didn't watch any of the Grand Prix that following season but I decided to tune in to the 2008 World Championships.


That was when I fell in love with Mao Asada.  Her "Ladies in Lavender" SP blew me away.  As I suspected Mao had turned out to be an incredibly beautiful skater.  That same lightness and ease was there but now she had maturity, control and grace.  Her SP literally gave me chills.  Up until that point Michelle Kwan was the only skater who had ever managed to do that.  Then to watch her fight her way to the gold medal after that terrible fall in the FS, I realized there was major grit and steel under that graceful veneer as well. I knew I was witnessing something really special with Mao and I knew needed to be around to see more.  I credit both Mao and Yuna for bringing me back to the sport as a full-time fan...but Mao was definitely my first love. 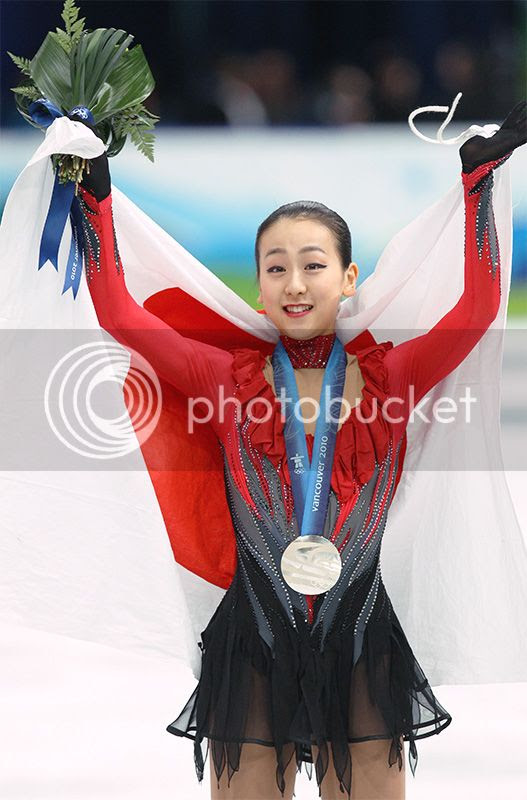 Mao's overall skating was what really drew me in.  I was impressed with her jumps but it was her line, elegance, ease of movement and that ethereal quality that wowed me more than anything.  I found myself a bit frustrated with her during the 2010 Olympic season simply because I felt her coach at the time, Tatiana Tarasova, had pushed Mao away from the artistic side of the sport in favor of highlighting Mao's triple axel.  The jump was fabulous; but Mao was so much more than a few triple axels and footwork.  She was gutsy and daring in Vancouver and made history as the first woman to land three triple axels in a competition.  Mao didn't get gold but I thought her silver was well-earned. 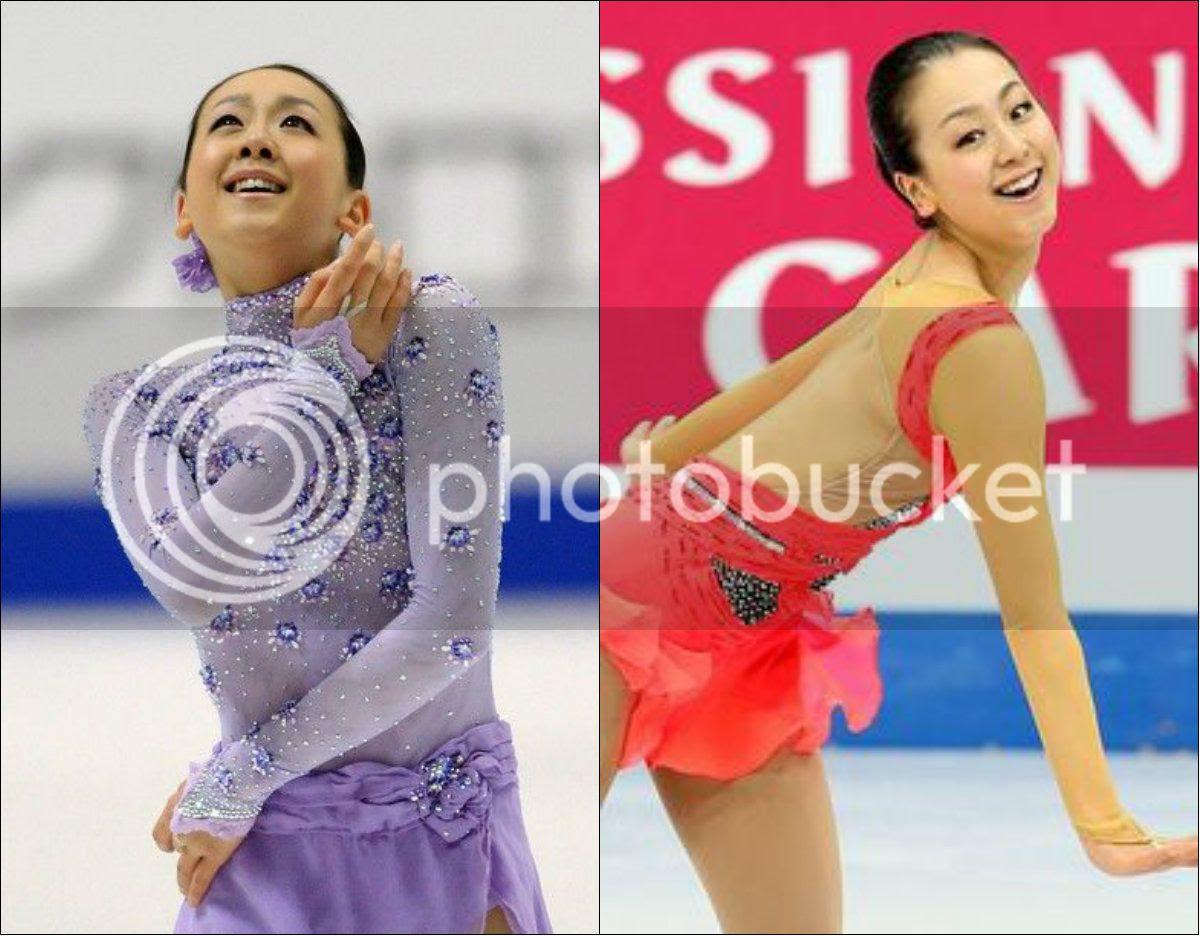 I think post-Vancouver was my favorite time in Mao's career.  That was when Mao "The Artist" really emerged and we started to see that artistry and versatility that had been missing.  It took her a few seasons to really get her feet back under her technically after Vancouver.  Mao reworked several of her jumps which made them unstable and she had to deal with a number difficult life events during that time as well (the death of her mother, the tsunami in Japan).  I think the thing that really endeared Mao to me was the fact that her career was not always smooth sailing.  Instead it was a career filled with peaks and valleys, highs and lows, and yet through it all Mao always managed to bounce back.  One year she would be on the World podium, the next she would miss it completely...but you'd be a fool to ever count her out because at any point she could be brilliant.  And when Mao Asada was brilliant she was one of the most stunning skaters to ever grace the ice.

The two seasons leading up to the 2014 Sochi Olympics were great for Mao.  She was back to winning the majority of the competitions she entered, her programs were lovely and balanced, and she was solid on the technical side as well.  Mao was a gold medal favorite coming into the event but her devastating 16th place finish in the SP killed any hope she had of earning that Olympic gold medal.  Despite the heartbreak she must have felt, Mao came out in the FS and, in my opinion, delivered the Olympic moment of that event.  Her performance was so incredible and moving.  Here's what I wrote in my review:


"It was the most memorable moment of the event for me.  I boo-hooed, I really did.  It was such a beautiful thing to witness and even though I feel the judges held her back in PCS and didn't give her the favorable calls others got, I didn't care because a moment like that can't be defined with a number.  That performance was so far beyond a placement or a score...it was cathartic.  It was what Mao needed to prove to herself that she's capable of having that Olympic moment she dreamed of.  She gave it her all and skated her heart out.  No, she didn't win a medal here...but in my opinion, that performance was worth five Olympic gold medals." 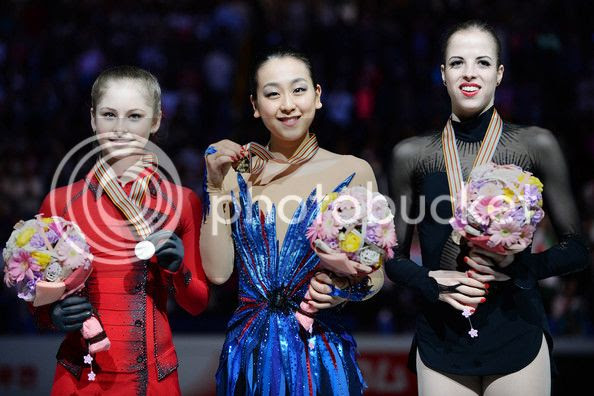 Mao picked herself up after Sochi and continued on, as she always did.  Her performances at the 2014 World Championships were amazing.  Mao's ability to shake off the sadness and disappointment over the results in Sochi so quickly and come out and deliver the way she did is one of the reasons I love her.  It's that determination and fighter's spirit that makes her such an inspiration.  Her SP was flawless and beyond gorgeous.  It set the world record for the highest SP score at the time.  It was a truly special moment to see her win her 3rd (and final) World title in front of a home crowd. 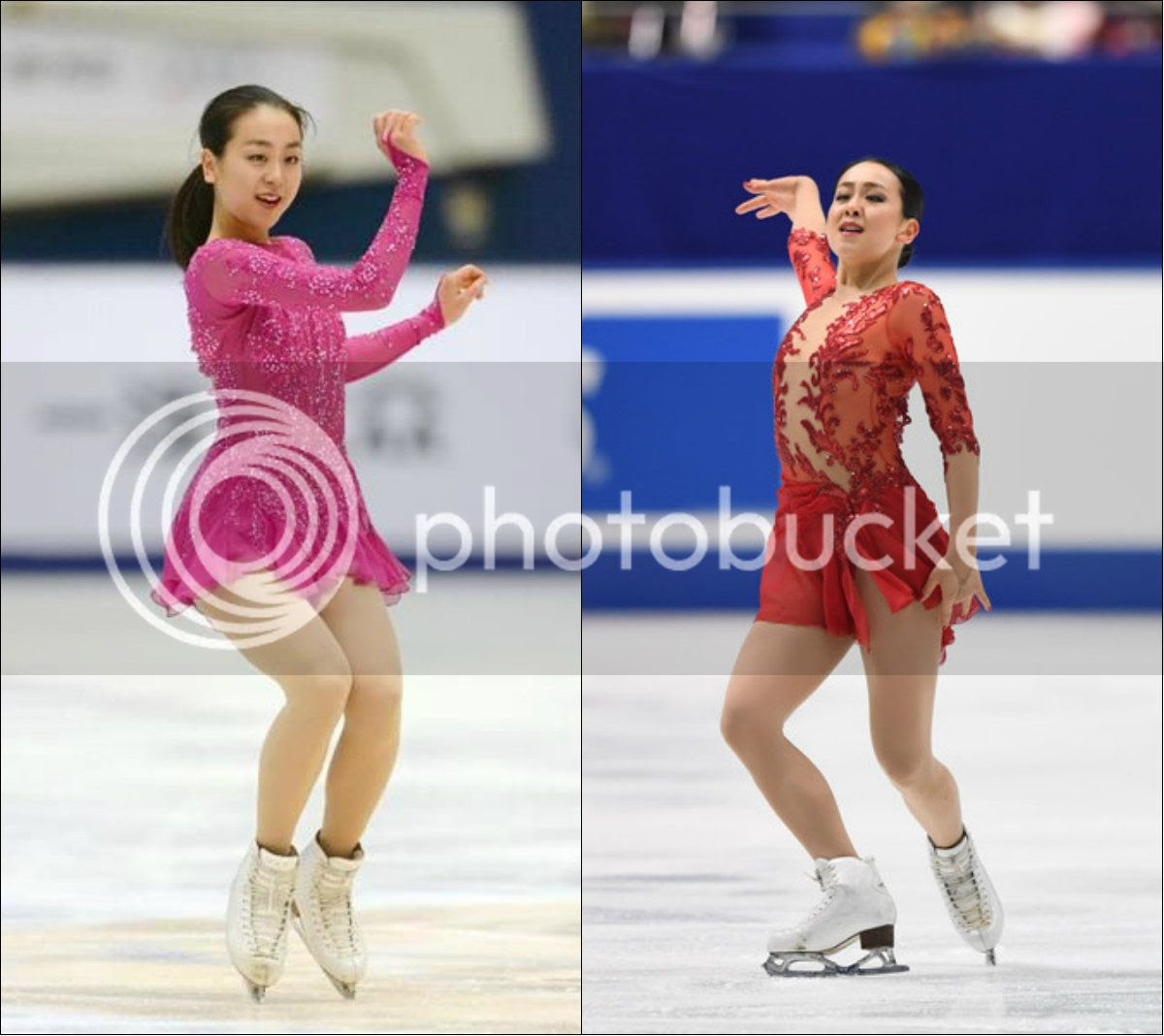 After Sochi Mao took a much deserved season off before continuing on.  By that time she was dealing with different injuries and setbacks that made it hard for her to match the technical level needed to keep her in the medal hunt.  Even though she wasn't winning medals Mao continued to raise the bar when it came to her artistry and performance.  After all of her years on the ice she was still finding ways to surprise me with her interpretation and range as an artist, not only in her competitive programs but in her exhibitions as well.  I did a post back in 2011 called Mao Asada: Queen of the Exhibitions.  The attention to detail and care that Mao put into her exhibitions is so far beyond what most skaters do.  It shows in her performances and it's what sets her apart from the rest of the field. 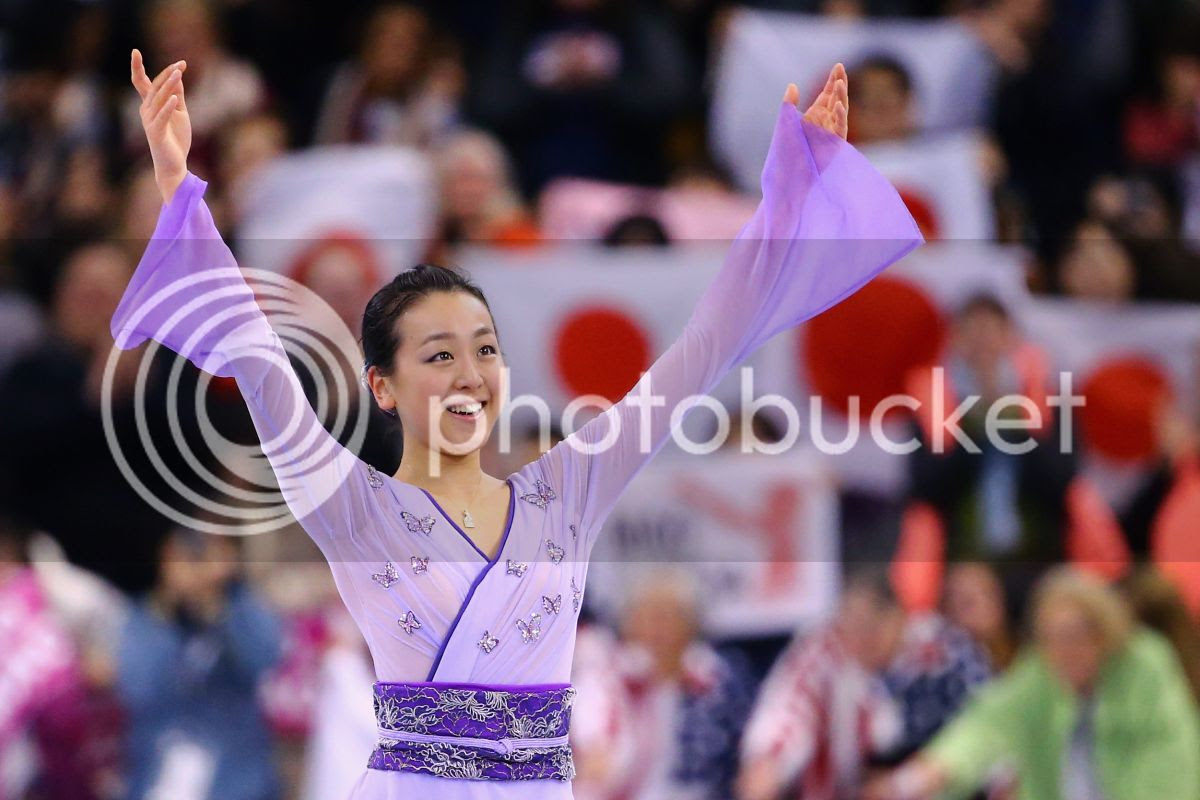 Mao never achieved her dream of winning Olympic gold but her list of accolades is a mile long: 2010 Olympic silver medalist, 3-time World champion (the most of any skater in her era), 4-time Grand Prix Final champion (the most of any in her era), 3-time Four Continents champion, 6-time national champion (a huge deal as Japan was the most competitive country for much of her career), 15 Grand Prix titles (3rd most in history), and Mao is the only skater to ever win a title at each of the seven Grand Prix events.  She is the most decorated skater of her era.  Mao is nothing less than a legend.

She has given so much of herself to this sport and has pushed the sport forward not only for her country but for women in general.  Mao opened the door for women to compete using the triple axel under the International Judging System.  So many skaters look up to her and are inspired by her. Mao is a treasure to her country and to the sport of figure skating.  She has gifted this sport with so many amazing moments, beautiful performances and incredible memories. 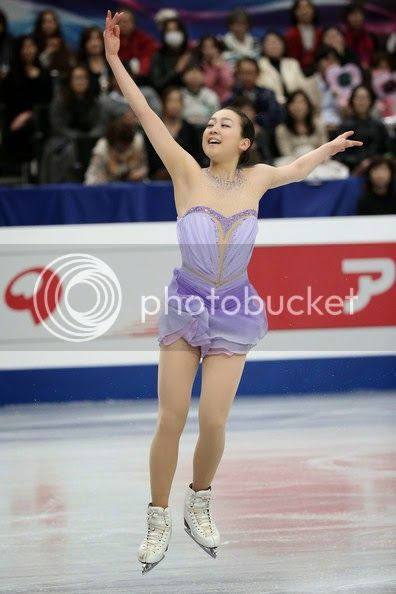 At times I felt as though the judges did not give Mao her due when it came to her scores; however, there is no denying that Mao Asada is every figure skating purist's dream: her carriage, her posture, her lines, the completeness of her movements, her flow across the ice, her gracefulness...  Her edges were sublime, her transitions were lovely and varied, her spins were beautiful, and her step sequences are still the most complicated, intricate and complex sequences I have ever seen a woman execute...and she made it look easy.  I run out of adjectives when I describe Mao: gorgeous, breathtaking, ethereal, graceful, stunning, majestic, elegant...the list goes on and on. She moves me with her skating.  In a word, Mao is exquisite.

Mao is my favorite skater of the post-Torino bunch.  I just love her.  She is everything. Mao made me fall in love with figure skating again.  I don't even think I realize at this moment how much I will miss her.  However, her legacy and the road she's paved for the skaters who come behind her will continue on.  She has made her mark and will forever be remembered as one of the greats in this sport. 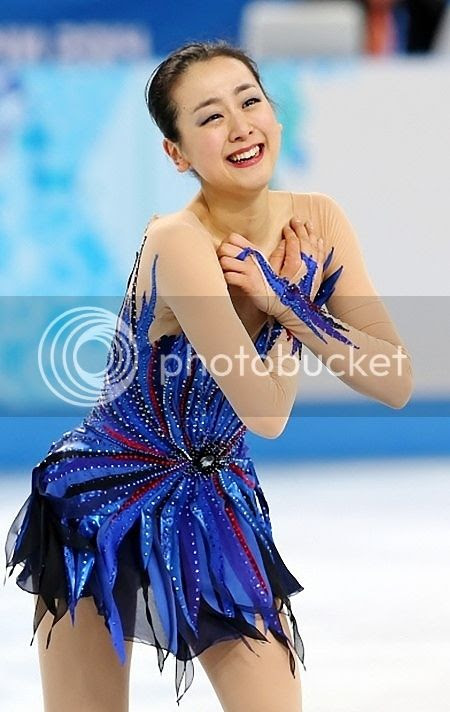 Goodbye, farewell and thank you to my first love, Mao-chan.
Posted by Naked Ice at 7:38 PM