We'll Be the Judge of That: 2014 Sochi Olympics - Results

So this was a much more massive undertaking than I originally thought.  I'm not the Excel wiz I wish I were otherwise this might not have taken so long.  Regardless, it was still a fun project.  I'm not surprised with the outcome but I am surprised with some of the scores we came up with.

I originally planned for 9 judges for both segments but we ended up with 7 judges for the SP and 6 for the FS.  As the high and low scores are thrown out, that meant we had 5 scores that counted in the SP and only 4 for the FS.  I know having fewer scores may have skewed the numbers one way or the other, but rather than just say eff it and not do the FS, I decided to work with the scores I had.

Our judges were as follows:

The protocols are in a link below the scores.  All of our judges were instructed to comment on each element and component score they gave.  My ambition for this project far exceeded my ability to work all of that data into a coherent post, so instead I've linked a page to all of the comments for each skater's performance.  Click on the bolded name of each skater in the recap below to see the detailed comments from our judges. Unfortunately all of the GOE and PCS were summarized into percentages on that page, so you'll have to look at the protocol to see who scored what.  However, the comments for each element are numbered according to the judge who wrote them (Note: only the numbered comments were used in the results).

BONUS:  As an additional treat Judge #5 (Claire Cloutier) decided to give everyone an insider's perspective of what it was like to re-watch these performances and score them as a judge would rather than just a spectator.  Please make sure to check out her post, Walking in the Judge's Shoes: The Sochi Judging Project, on her blog A Divine Sport.  (Thanks again Claire!)

Here are the results after the SP:

And of course, here are the WBTJOT protocols.  Remember scores are in numerical order and correspond to our judges listed above.  I've also included the actual Sochi protocols for comparison. 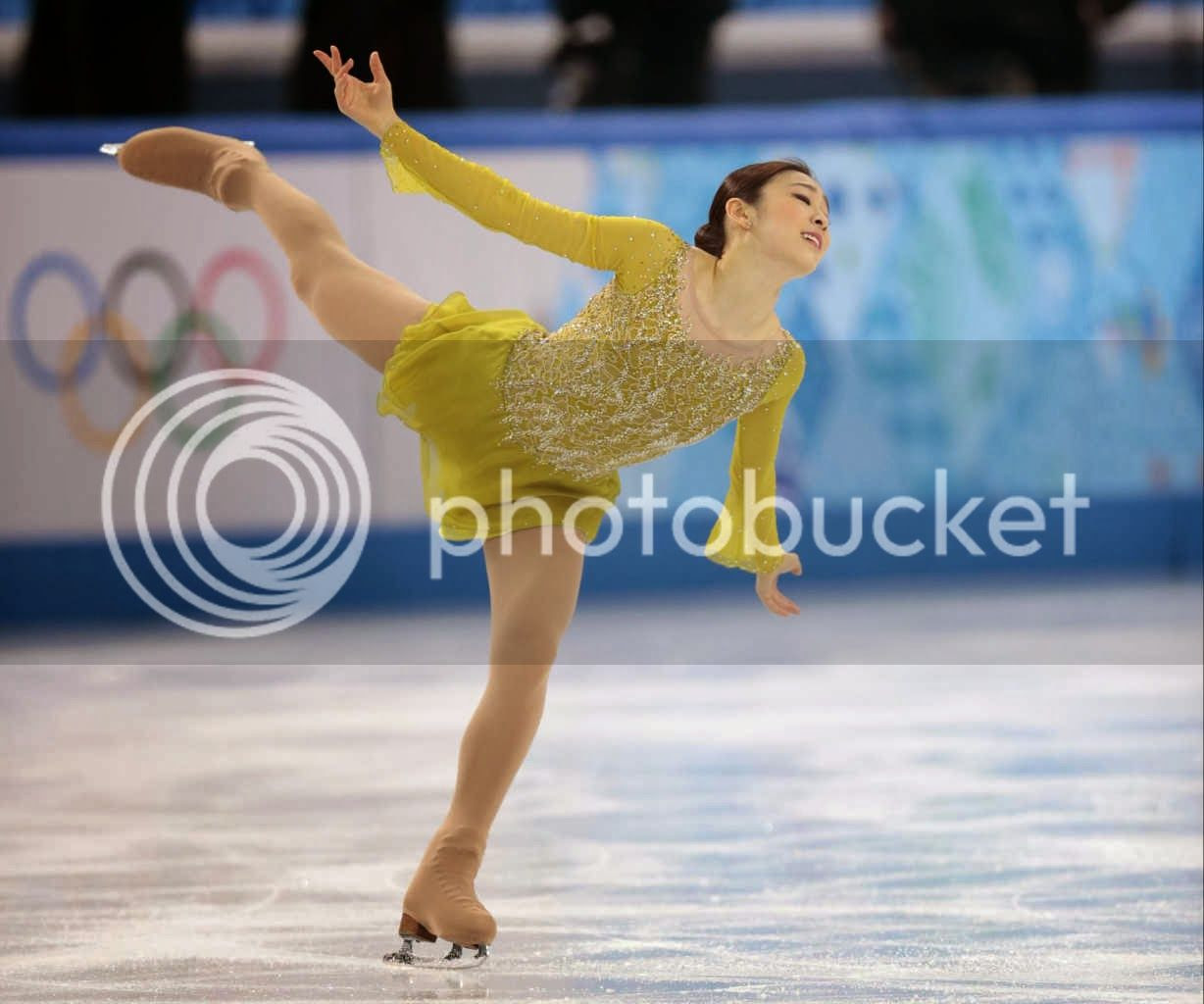 Our scores had Yu-Na Kim ahead of the field by 1 point (73.97), whereas in Sochi the top 3 were separated by only tenths of a point.  It's still a very close race but the separation is a bit wider.  Interesting to note that Yu-Na placed 2nd in both TES and PCS in this segment.  Yu-Na's jumps and step sequence are what gave her the edge here.  Those elements received high GOE (+2s and +3s) and accounted for the majority of the +GOE in her score.  Yu-Na's spins earned +GOE but not nearly as much as her jumps.

Our judges had Carolina Kostner in 2nd place with 72.97 (versus 3rd in Sochi), only 1 point behind Yu-Na after the SP.  Just like in Sochi our judges had Carolina 1st in PCS by a narrow margin.  Carolina's combo and solo triple as well as her step sequence earned her the most GOE.  Her axel and spins received +GOE but not as much as the other top ladies. 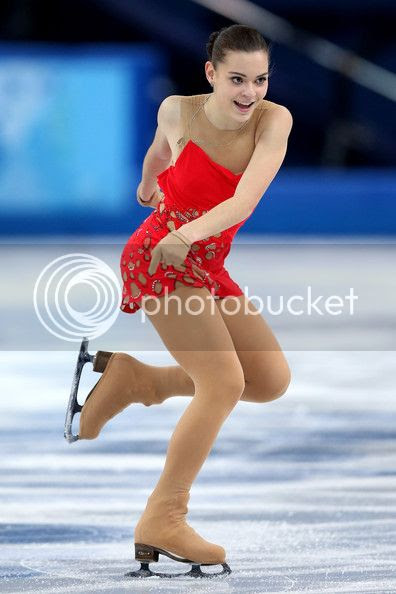 Adelina Sotnikova places 3rd with 71.03, not far behind the top two, but far enough behind for there to be the separation most people expected to see.  She places 1st in TES and earned the most +GOE in the field (+7.76; Yu-Na: +6.50, Carolina: +6.08).  Adelina earned 1.00+ in GOE for every element except her step sequence which helped to boost her TES above the rest of the field.

Like in Sochi Gracie Gold places 4th.  Judging by the score she received in Sochi (68.63) and our score (67.12), our judges were in agreement with the Sochi panel.  Gracie's elements were solid but did not have as much flow and ease as some of the others which earned her less GOE.

Our judges had Ashley Wagner in 5th place after the SP with 64.40.  She lost points on her 3-3 combo but gained 1.40 on her solo triple and earned a solid amount of GOE with her other elements which was enough to keep her in the top 5. 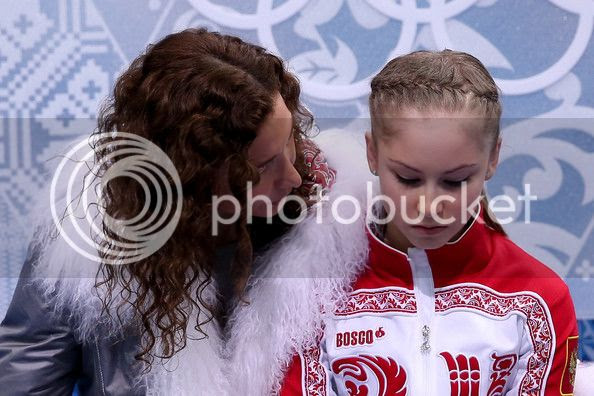 Julia Lipnitskaya finishes the SP in 6th place with 62.84 instead of the 65.23 she received in Sochi.  The less generous PCS made the difference here. Compared to our judges' scores Julia received padded PCS and that held her up despite her major error in the SP. 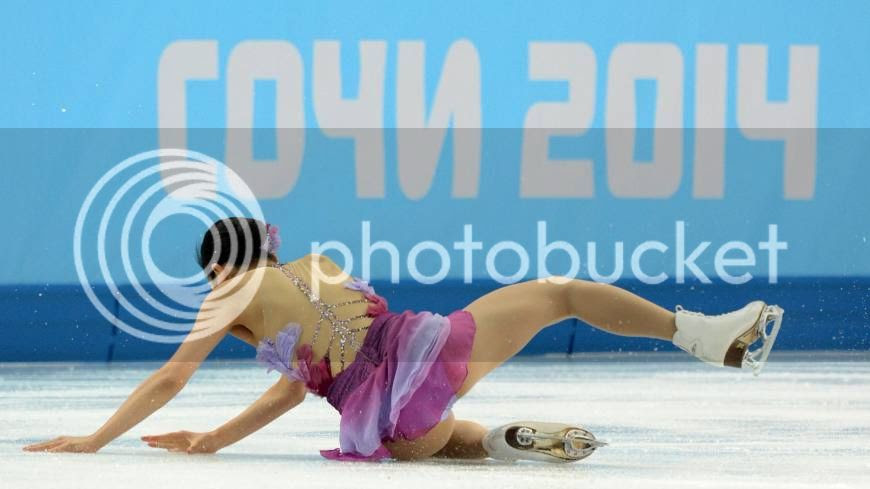 Remember we lost one judge in the FS so instead averaging 5 judges, we dropped down to only 4 judges whose scores were calculated to come up with the FS totals.

Here are the FS results:


Here are the WBTJOT protocols and the Sochi protocols.

I will say I was surprised by how close the scores were in this segment of the competition. 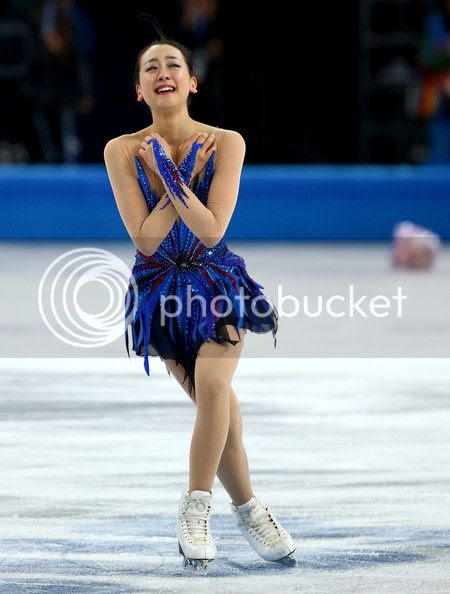 Mao comes out on top by a sizable margin winning the FS by more than 8 points.  Our judges gave her 148.23 vs the 142.71 she received in Sochi.  Fact is even with the under-rotations on two of the combinations, Mao's base value of 66.34 was nearly 5 points higher than Adelina who had a base value of 61.43 (2nd highest).  Our judges also had Mao tied for 2nd in PCS (72.02) which wasn't the case in Sochi (69.68).  She is often lowballed in PCS relative to the other top names but with our judges' scores Mao was on the same level which allowed her TES to be the deciding factor in the FS. 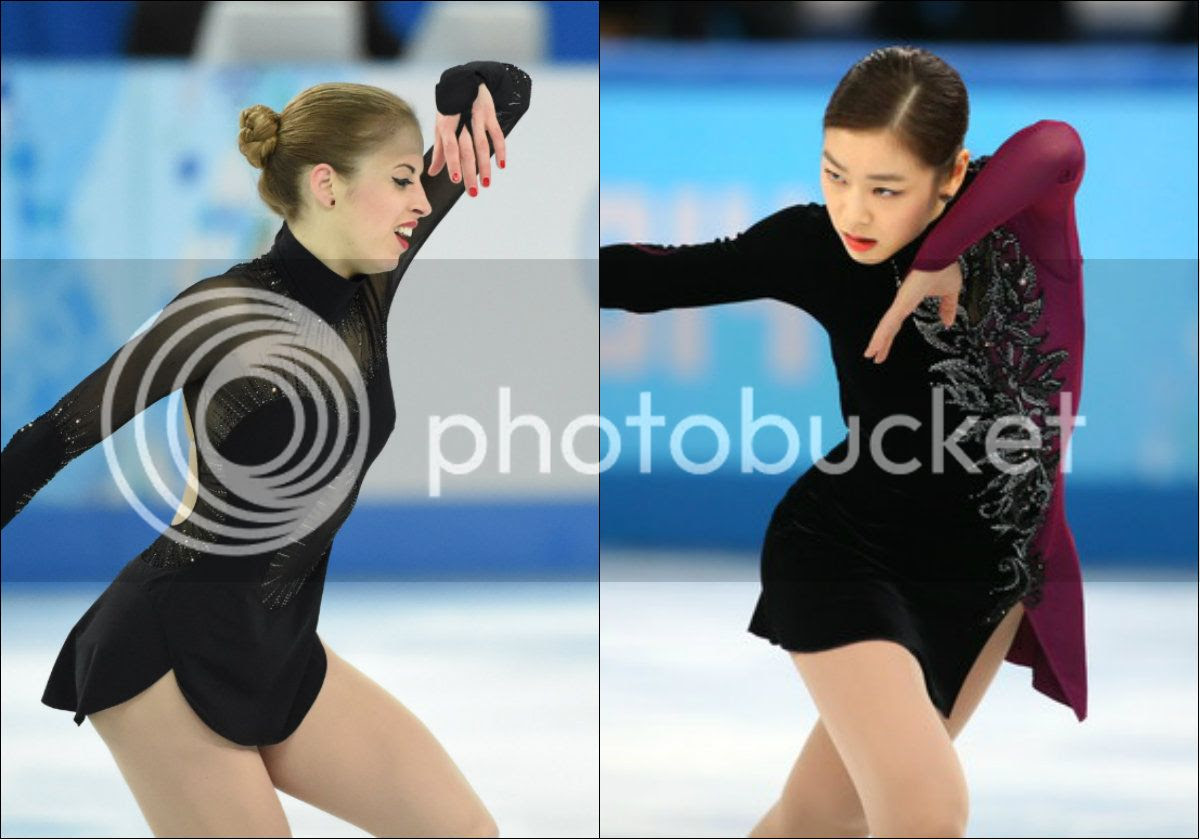 I was super-surprised to see that Carolina finished 2nd in the FS.  She beat out Yu-Na, who finished 3rd, by only 0.02.  With our results Carolina and Yu-Na were basically in a dead heat.  Yu-Na had the slightest lead in the TES (67.88 to 67.30); Carolina had the slightest lead in PCS (72.62 to 72.02).  Looking at it on paper they had very similar base values (Carolina: 58.45, Yu-Na: 57.49), both received roughly 10 points in +GOE from our judges, and both had similar strengths and weaknesses in PCS as well.  I thought this was a very interesting outcome.  In Sochi Yu-Na earned 1.58 points more overall in the FS, which is a rather small margin when you think about it.  It's possible that having fewer judges lessened the margin; if we had a full panel we may have had a slightly bigger gap or the placements may have flip-flopped. 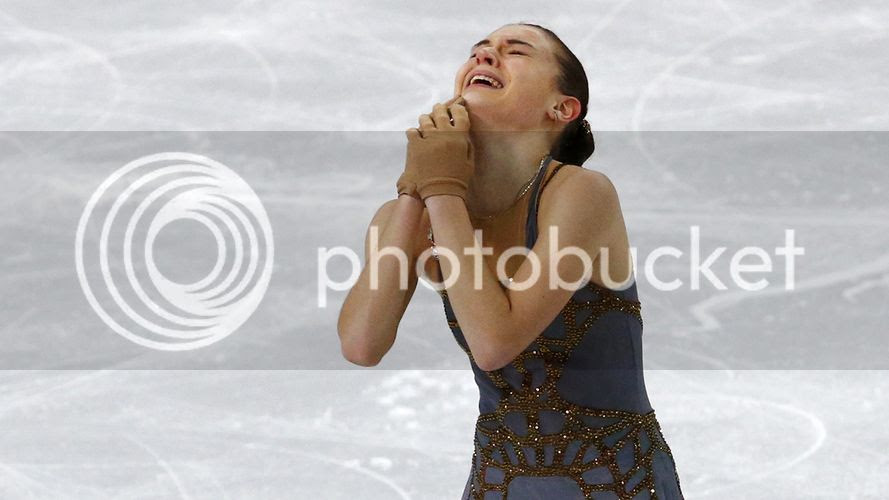 Adelina finishes 4th in the FS.  The surprising result here is that Adelina's score ended up being only 1.62 points behind Yu-Na's score (138.28), but nowhere near what she earned in Sochi (149.95). Adelina was 2nd in base value and 2nd in TES overall.  Other than the stumble on the three-jump combo (which cost her -1.40 points from our judges), nearly everything else she did earned positive GOEs.  Most of her jumps were solid and her spins were excellent.  Our judges rewarded her for those parts of her skating; however, we were not nearly as impressed with her in terms of PCS as the Sochi judges were (66.82 vs 74.41 in Sochi).  That's nearly an 8 point difference in PCS...

Ashley ends up with roughly the same score (128.82 vs 127.99 in Sochi) but finishes 6th in the FS instead of 7th.  Overall I found that Ashley's scores were pretty much on the money in Sochi; however, it was the way other skaters (in particular Julia) were scored relative to her that raised some eyebrows. 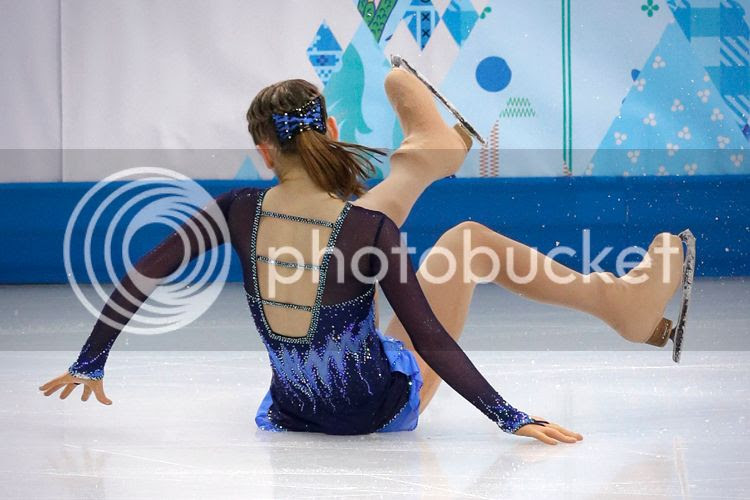 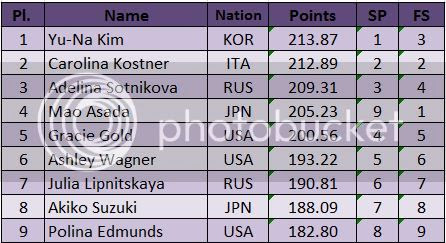 Note: With the margin being so small it is very possible that 1st and 2nd place may have come out differently if we had a full panel of scores to calculate.  Oh well, I worked with what I had and this is what we came up with!


Yu-Na Kim wins her second Olympic gold medal and Carolina Kostner takes home an Olympic silver medal.  Adelina Sotnikova does very well at her first Olympics and walks away with a well-earned bronze medal (and significantly less hate and vitriol from the figure skating community).

Mao Asada jumps from 13th in the SP to finish a relatively close 4th overall.  Though the SP was a bit of a disaster, Mao's high base value and strong PCS allowed her to make up ground in the FS and finish just off of the podium.

Gracie Gold places 5th overall.  Gracie had two solid albeit lackluster performances in Sochi.  Still, she got the job done and our judges placed her top 5 at her first Olympics.

Ashley Wagner finishes in 6th place behind Gracie.  Despite Ashley's under-rotation issues she did complete both programs without any major errors and our judges rewarded her for that.

Julia Lipnitskaya places 7th overall.  Julia had major errors in both programs.  Thanks to a boost in PCS she was able to stay in the top 5 in Sochi; however, without the PCS our judges placed her lower.

The only skaters who retain their placements from Sochi are Akiko Suzuki and Polina Edmunds, who finish 8th and 9th respectively.

This was a lot of fun and a lot of work.  I don't think I really understood how much calculation, data crunching and time this would take.  Still, I enjoyed all of it.  I'd definitely be down for doing it again.  I'll let you guys decide if you want to score another event (leave me a comment below).  If we get enough judges who want to participate, I'll make it happen.

A big THANK YOU!! to all of the judges who participated! You guys rock!!