I'm still a little hungover from the Olympics but this season isn't over yet!  Last weekend was the 2018 Junior World Championships and we saw some majorly historic stuff go down in the FS... 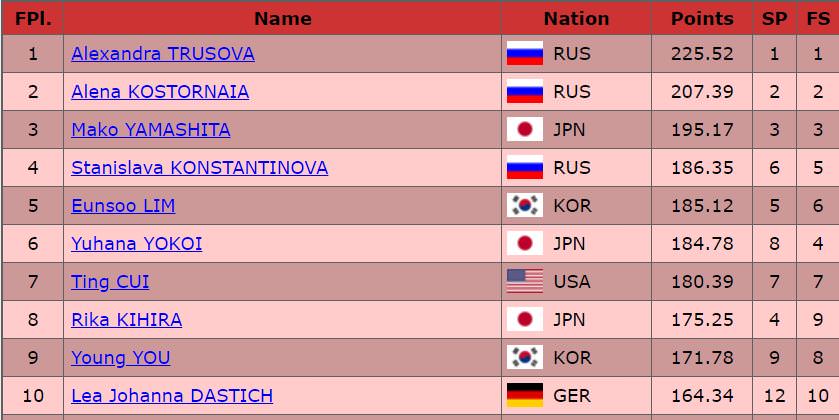 Alexandra Trusova (RUS): 225.52 - 1st
Excuse me while I attempt to pick my jaw up off of the floor.  Holy mother of progress!  Alexandra Trusova made history at this event by hitting not one, but TWO quads!  She becomes only the second woman to land a quad in competition (the first was Miki Ando back in 2002 at the JGP Final), and the first woman to land two quads in a competition.  Alexandra delivered a stellar SP and carried a small lead into the FS.  Less than a minute into her FS it was clear she was the winner. She opened with a big 4S (+2.00) and followed it up with a huge 4T.  But she wasn't finish yet...Alexandra went on to nail 7 triple jumps in the bonus section of the program (6 out of 7 in combination) on her way to a record obliterating 153.49 FS score. Naturally she set the record for highest overall score for a junior woman and captured the title by more than 18 points.

Alexandra is 13 years old and has yet to tackle puberty which means she may not be able to execute quads in a few years time...but who cares?!  She's doing them right now and this was a monumental moment for women's figure skating.  It proves that quads can be done by women and though it might take another quadrennial or two, I do think eventually we'll see more quads in women's skating.


Alena Kostornaia (RUS): 207.39 - 2nd
I'm such a fan of Alena!  She's so much more different than the majority of Eteri's skaters in terms of her attention to detail and fluid style of skating. It really makes her stand out in the best way possible.  She's just a lovely skater to watch and on top of that, she has the technical firepower to be a major force as well.  Other than a ding on her 3Lz in the SP (which cost her nothing), Alena delivered in both of her performances and won the PCS for both segments.  I think there should have been a bigger gap between her and Trusova in that department but c'est la vie. Unfortunately, despite her backloaded and difficult content, she had no hope of catching the Quad Queen (too soon?) in this competition.  Still, Alena posted big scores and easily captured silver here. I'm so happy for her and I'm really really looking forward to watching her grow and develop in the future.  She's a perfect example of a skater who blends the technical side the sport seems to be leaning to with the classic elegance the sport seems to be losing.


Mako Yamashita (JPN): 195.17 - 3rd
Mako came in as the #2 for Japan behind Rika Kihira.  However, where Rika struggled, Mako soared.  I'm so impressed with the way she's matured over the past few months.  I see even more improvement now with the way she relates to the music and takes her time with the movements.  She definitely has that classic Japanese aesthetic (soft knees, great edges, strong jumps) and she seems to be getting the hang of managing her nerves when she competes.  Mako turned in two excellent performances, including two 3Lz-3Ts in her FS.  She's behind the Russians in PCS (who isn't?) but her performances here should help her PCS to climb if she can pick up where she left off next season.  Mako scored a new season's best and walked away with the bronze medal.


Stanislava Konstantinova (RUS; 186.35, 4th): Stanislava struggled in both programs placing 6th in the SP and 5th in the SP.  I have to say there are parts of her skating I really like and others I don't.  The main thing I want to see her get rid of is that floppy noodle arm masquerading as a "tano" arm in her jumps.  It looks terrible and it's doing very little to boost her GOE, so I say scrap it.  With the recent announcement of Evgenia Medvedeva pulling out of senior Worlds, Stanislava will compete again next week in Evgenia's place.


Eunsoo Lim (KOR; 185.12, 5th): I'd have had Eunsoo higher here--4th or possibly even on the podium.  I do not think the judges give her nearly enough credit for her Yuna-esque jumps and speed across the ice, nor does she get any love for her personality and the way she presents herself on the ice.  Her SP was excellent and though she had a step-out and under-rotation on a double in her FS, I still think her program was among the top in the field.  I really hope the judges give this girl her due one day.

Yuhana Yokoi (JPN; 184.78, 6th):  Yuhana came in as the 3rd ranked Japanese skater and a bit of an unknown.  She had one event this season, JGP Riga, where she placed 5th.  Even though she wasn't on anyone's radar, she did a good job of leaving her mark here.  A fall in the SP left her in 8th place but she had a brilliant skate in the FS to finish 4th in the segment and move up to finish 6th overall.  That program was the hottest of hot messes but I was really impressed with the way she nailed her jumps.


Ting Cui (USA; 180.39, 7th):  Ting was very strong in both programs. She had a fall early in her FS but was able to bounce back and complete the rest of her jumps cleanly.  I feel like Ting is the first American junior in a long while to look as though she may have a shot at competing with the top girls.   She has big jumps and is capable of 3-3s.  Hopefully she'll continue to improve and work on upping her technical content which is an absolute must if skaters want to be competitive going forward.


Rika Kihira (JPN; 175.25, 8th):  Rika was expected to be one of the main podium contenders at this event.  She is one of the most capable skaters out there but she struggles with keeping her focus.  An under-rotation and fall on her combo left her in 4th place after the SP but still within striking distance of the podium.  Rika intended to open her FS with two triple axels but was unable to complete either. An under-rotation and fall on her 3Lz-2T later in the program hurt her TES even more and dropped her down to 9th in the FS and 8th overall.  I'm still crossing my fingers for Rika.  She's an amazing talent and with her triple axels she is one of the few people in the field who can challenge the Russians.


Other Competition Notes:  Young You (KOR; 171.78, 9th) struggled a bit here but it's obvious she's another Korean skater who could be in the mix in the coming years. She has strong content and a good personality on the ice.  Hopefully we'll see her continue to improve...Emmy Ma (USA; 139.98, 19th) is so wonderful to watch.  I'd have given her the top IN & CH scores of the competition.  I just wish she had the technical ability to make her a contender.

Amazing competition from the top three skaters! Congrats to the medalists!  There is so much talent in the junior ranks.  I'm looking forward to watching these young women develop and grow and continue to push the boundaries of this sport.  Some of the skaters here will likely be the stars of this upcoming quadrennial.  It's going to be an interesting one, that's for sure!

Next up is the last major event of the season: 2018 World Championships which will take place March 21-25 in Milan, Italy.  There are a number of top skaters not competing at this event so it will be interesting to see how it shakes out.  Laters!
Posted by Naked Ice at 8:52 PM