This was by far the most surprising World Championship competition I've seen in a long long time. 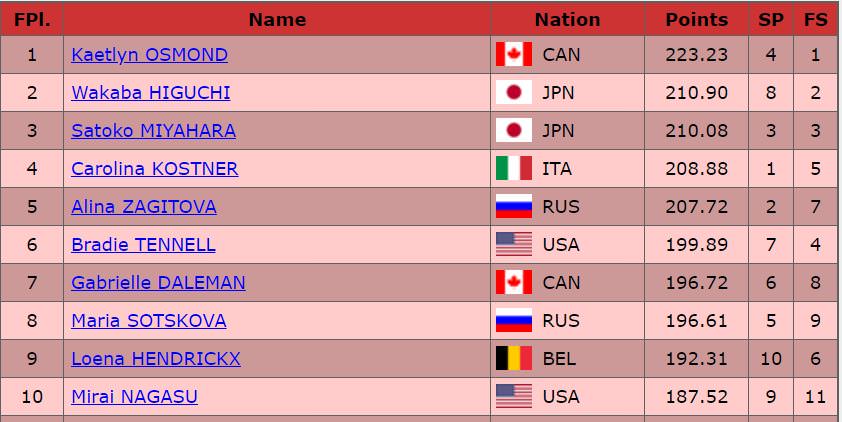 Kaetlyn Osmond (CAN): 223.23 - 1st
I really wasn't sure if Kaetlyn had another strong competition in her after what she was able to do at the Olympics.  She was a bit off in the SP.  She was a little slow checking her free leg in the combo, held on to the lutz but stumbled out of the axel.  Kaetlyn finished 4th in the SP, more than 7.50 points out of 1st.  By that time I figured she'd be in the battle for bronze...but no one could have predicted what happened in the FS.  Kaetlyn skated first in the last group and other than a step out on the landing of her 2A-3T (-0.70) and a ding on her lutz, she was excellent.  The program didn't have that same spark like it did in Pyeongchang but it was still a very strong and beautifully skated program.  Kaetlyn posted a big 150+ score that I figured would definitely hold up for a medal but it ended up blowing past everyone to take 1st place in the FS which pushed Kaetlyn to 1st place overall and the gold medal.

Kaetlyn is the first Canadian to win Worlds in 45 years.  I couldn't be happier for her!  This has been an amazing year for her and she deserves this.  I think she is a tremendous talent and it's great to see her realize her potential.


Wakaba Higuchi (JPN): 210.90 - 2nd
After missing out on a spot at the Olympics this competition was Wakaba's time to earn some redemption.  It didn't start off too well for her.  A fall on her combo and ding on her flip in the SP severely hurt her score and left her in 8th place heading into the FS, more than 13.50 points out of 2nd place.  At that point I figured she could still move up to the top 5 with a strong FS performance.  Not only did Wakaba move up, she jettisoned up the ranks with what was the skate of the competition for me.  Her "Bond/Skyfall" FS has been a favorite of mine all season and to see her have that kind of performance here was incredible.  She gave it everything she had and you could see it.  She broke down at the end of the program and again when her 145+ FS score came up.  Given her deficit in the SP I thought she had a good shot at 4th or 5th place but I was thrilled to see her place 2nd here and win the silver medal.

Wakaba is another tremendously talented skater who struggles from time to time, so to see her deliver at the perfect moment was amazing.  This silver medal earns Japan that 3rd spot they lost last year and will hopefully make the judges respect Wakaba more as we head into this next quadrennial.


Satoko Miyahara (JPN): 210.08 - 3rd
Satoko came into this competition riding a wave of momentum from Pyeongchang where she placed 4th.  I knew if she could deliver here she had a great shot at a medal.  The SP wasn't Satoko's best but it was still pretty damn amazing.  She got called for an under-rotation on her combo but was able to rack up points with her other elements.  Additionally, her strong PCS kept her in fighting range and helped her finish the SP in 3rd place.  Satoko's FS was lovely but not without issues.  She got an under-rotation on her 3-3 combo and on a double jump, and also had a strange fall on an opened up double salchow.  I figured she was off of the podium after that but, as fate would have it, Satoko's scores held up and she finished 3rd here, less than a point out of 2nd place.

I'm so happy for Satoko.  Small jumps aside I think she is one of the top 3 best skaters in the field.  Her elegance and artistry are simply divine and she's such a strong competitor.  It was great to see her hold on for a podium finish and her second World medal.

Carolina Kostner (ITA; 208.88, 4th):  Carolina started off this competition in grand fashion, nailing everything in her SP and posting the top score of the segment (80.27).  It was such a gorgeous performance and to do it in front of a home crowd must have felt amazing.  Unfortunately things didn't go so well in the FS.  Carolina's content is weaker compared to everyone else and with the scores that came prior to her taking the ice as the final competitor of the competition, she needed to be perfect...and she wasn't.  It wasn't enough to keep her on the podium and she dropped down to 4th overall.  Medal or no it's such an amazing thing to see Carolina still competing, still being competitive and still creating moments like she did in the SP.  She is a treasure.


Alina Zagtiova (RUS; 207.72, 5th):  I think everyone on the planet assumed this title was Alina's.   It just goes to show that ice is slippery and nothing is guaranteed.  Alina had a slight issue with her combo in the SP which left her in 2nd place but only 0.76 out of 1st.  Unfortunately Alina's FS was a disaster.  A total meltdown I wouldn't have thought possible. She fell on her first jump (3Lz) and had zero time to regroup before her next jump, a downgraded 2A-3T which she also fell on. She fought through her 3 jump combo before attempting the 3Lz-3L combo she missed earlier.  She under-rotated the 3L and fell a third time.  She landed her 3S but under-rotated before finally hitting her final two jumps (3F, 2A).  At the end Alina looked completely devastated. She placed 7th in the FS which dropped her down to 5th overall.

I feel bad for Alina.  It was obvious she was a little off at the beginning.  If she'd had a bit more time to breathe and refocus between jumps she may have been able to salvage more of the program.  That is the danger of clustering jumps like that; if you can't immediately refocus things can go downhill quickly.  I have no doubt she'll bounce back from this.  She's an unbelievable talent and it's clear she's just getting started.  This was a bad competition for her but she has every reason to hold her head high and be proud of what she accomplished in her very first senior season.


Bradie Tennell (USA; 199.89, 6th):  Bradie definitely exceeded my expectations here.  I figured 7th or 8th would be the highest any American would finish but she proved me wrong.  Her SP was solid and strong, and even though she got hit with two under-rotations in the FS she still placed 4th in the segment which moved her to 6th overall.  Unfortunately, Bradie's placement combined with the other Americans in the field were not enough to hold on to three spots so the US will only send two women to Worlds next year.  Bradie will definitely be a front-runner for one of those two spots.

Gabrielle Daleman (CAN; 196.72, 7th):  Gabrielle came here looking for redemption and she got it.  Her SP was clean and easy, and she was thrilled about it.  You could tell getting that performance out of the way meant a lot to her.  According to Twitter, Gabby injured her ankle prior to the FS but competed anyway.  To say she was injured, she gave it her all.  There were a few under-rotations and turned out landings but Gabby fought for everything and didn't give up.  No matter which way you look at it, she's redeemed herself from those performances in Pyeongchang.


Maria Sotskova (RUS; 196.61, 8th):  Maria had a good SP though I was a little baffled by the no calls on some of her jumps.  She had a number of scratchy landings but everything was called as clean.  She finished the SP in 5th place.  The under-rotations did show up in the FS (four total) which hurt her score quite a bit and dropped her down to 8th place.  With Alina's shocking 5th place finish, Maria's 8th place finish was just enough to keep Russia's three spots for this event next year.


Loena Hendrickx (BEL; 192.31, 9th):  Loena is the biggest surprise of the top 10.  I don't think anyone expected to see her skate so well here.  I've heard of her before but I've never paid attention to her...I will from now on!  Loena delivered a solid SP (3Lz-3T, 3F, 2A) and placed 10th in the segment.  She turned in a clean FS and ended up finishing 6th in the segment which moved her up to finish 9th overall.  I was very impressed with her!


Mirai Nagasu (USA; 187.52, 10th):  Mirai did not go for the 3A in either program here, opting to play it safe instead.  I respect that.  Her SP was lovely...actually the best I've ever seen her perform it.  Much more attention to detail and feeling.  It was lovely.  Mirai received a downgrade on her combo which hurt her score and left her in 9th place.  Her FS was very well-skated in my opinion.  Apparently Shin Amano was the technical caller here.  He is known for being brutal when it comes to rotation calls and he hammered Mirai here.  Four under-rotations and an edge call.  Honestly, I saw maybe two under-rotations...but four?  I think he was overly harsh with Mirai's jumps especially considering how well she's been skating all season.

Here's something interesting...I paid attention the TES box at the top of the screen while Mirai skated.  The judges gave her strong +GOE for all of the jumps she got called for (except the 3F which didn't have any GOE).  I take that to mean the judges liked her jumps and thought they were clean in real time...until Amano started throwing carrots at which point everyone changed their mind and marked her down. Is that how it's supposed to go?  Aren't the judges supposed to go by what they see?  Harsh calls aside I think Mirai delivered a strong program and should be proud.  Shin Amano can go kick rocks...

Other Competition Notes: Elizabet Turzynbaeva (KAZ; 186.85, 11th) had a much better competition here.  Her FS was lovely...Mariah Bell (USA; 174.40, 12th) had a rough SP but had a slightly stronger FS.  I wonder where she goes from here?...Dabin Choi (KOR; WD) got hammered with under-rotations in the SP and ended up withdrawing from the FS due to her boot breaking.


This was a crazy way to end the season but I'm thrilled with the results!  Skating can be really unpredictable sometimes and that's what makes it fun.  Congratulations to the medalists!  I'll post my End of Season Power Rankings sometime soon.  To be honest, I'm looking forward to a blogging break!